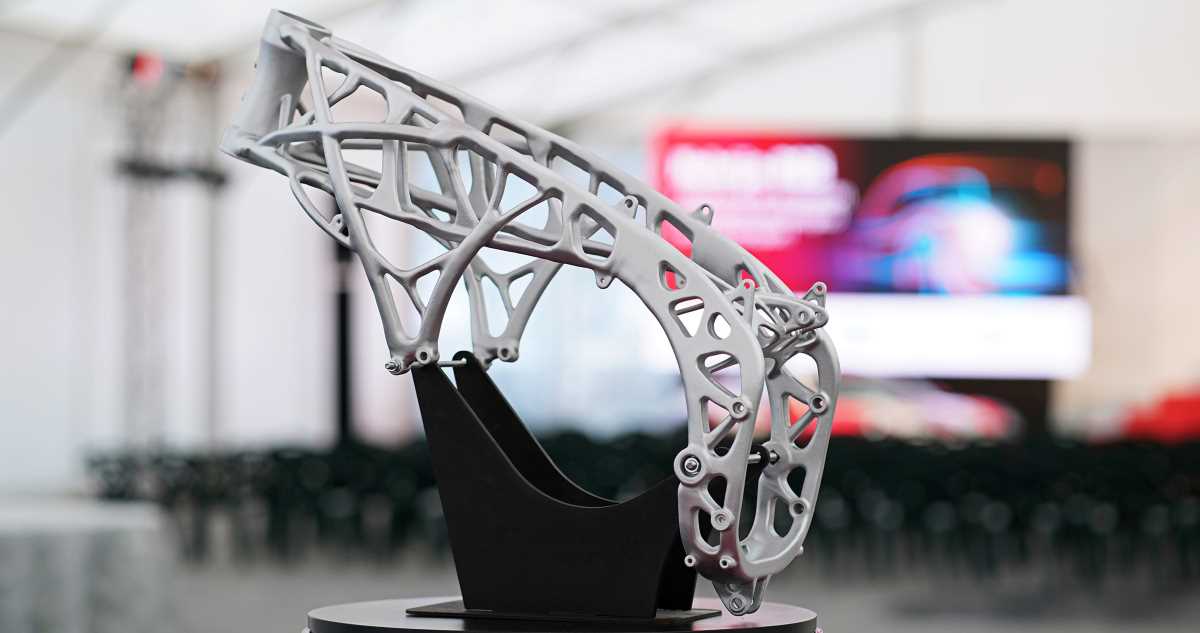 Additive manufacturing continues to advance in all fields, and in the motorcycle world the latest news is a 3D printed steel motorcycle chassis conceived by the University of Nebrija and ArcelorMittal.

3D printing or additive manufacturing is not new in the motorcycle world. And it is that in some prototypes or limited series this technology is already used in some of its components, either in plastic, mainly, or metal.

An example of this is the solid aluminum 3D printed chassis and swingarm that BMW showed almost 4 years ago as a mere design exercise, and that has not been applied to a production bike yet.

Well, the most recent example is in our country, since the University of Nebrija -its MOD3RN department, a research group led by Rafael Barea, a researcher at the university- in collaboration with the company ArcelorMittal, at its facilities in Avilés , have designed and 3D printed a motorcycle chassis in steel.

But the surprise is that if BMW’s design was a static showcase, this chassis is a 100% functional development. It is the basis of an experimental Moto3 that is already rolling on the circuit.

At the moment they use a Honda Moto4 engine and later they will use engines with greater power. The tests have started on kart circuits, and they will soon start rolling on GP circuits.

In other words, we are facing the first motorcycle equipped with a fully functional 3D printed chassis in history.

This 3D printed steel chassis is revolutionary because it is hollow and has 0.8mm thick walls

This is an investigation of the University located in Hoyo de Manzanares together with the technical partner ArcelorMittal, which provides 3D printing in metal as an investment in R&D that has its sights set on a future commercial application of this technology.

Another great novelty is that this chassis has been designed with in-house generative design software, the work of the Nebrija University engineering team, led by doctors Corbera and Barea, together with the full support of the ArcelorMittal engineering team led by Paula Rodriguez.

This is because they needed to control many more parameters that were impossible to do with commercial software.

And for this reason, this chassis exhibits this bioform design that you can see in the images, because the software optimizes the weight to the maximum while maintaining its structural strength.

It is so light that this chassis specifically weighs only 3.8 kg, when an aluminum equivalent would weigh around 5 kilos. Another made of steel would double this figure, reaching 7 kilos.

Asked about why steel instead of aluminum, Dr. Corbera tells us “because it is a strategic material for ArcelorMittal, specialized in steel, to highlight that steel still has a long way to go in the world of 3D”.

And he continues, «in the first design we achieved a weight of 2.5 kilos, and even up to 2.1 kg, which are big words when talking about a motorcycle chassis. The next step will be to develop a 3D printed swingarm as well.”

And as for the software itself, he continues “with our generative design software we have worked to achieve lateral flexes, maintaining rigidity during braking and acceleration. And all while minimizing the weight, which in our case we have maximized by hollowing out the structure, with walls of up to 0.8 mm. It is the first part of this size to be made in 3D in metal with hollow walls, and it is quite an achievement.”

But what is surprising is that it is made of steel, with an experimental metal 3D printer from ArcelorMittal that is still secret. In this type of printer, steel powder is solidified layer by layer with a high-power laser.

And Dr. Corbera adds «It is quite a feat since it has had to optimize the design and orientation of the piece to print it. This is to avoid the creation of support structures inside its walls, although we have some metal dust left inside. But we are about to print the new version.”

This chassis is a revolution. Because of the software developed, because of the printing process carried out in Avilés with a printer that has not yet been revealed, and because it is the first motorcycle with a 3D printed chassis that rolls on the circuit.

Surely we will see him riding in competition at the CEV next year, and we will soon see him in MotoGP…

We already have the official price of the Honda XL750 Transalp 2023, and it is not as expected…

Surprise! the exciting Kawasaki Ninja ZX-4RR for sale in Spain

If you have a smart lock and the power goes out,...

Brady Hernandez - 16/09/2022 0
One of the most used options to home automation is to have an intelligent lock. It is basically an alternative...

How to download WhatsApp statuses on iPhone or Android

How to Send WhatsApp Group Invites on iPhone – All Methods

How to put a video in a WhatsApp video call –...

A Nissan Ariya will go from the North Pole to the...