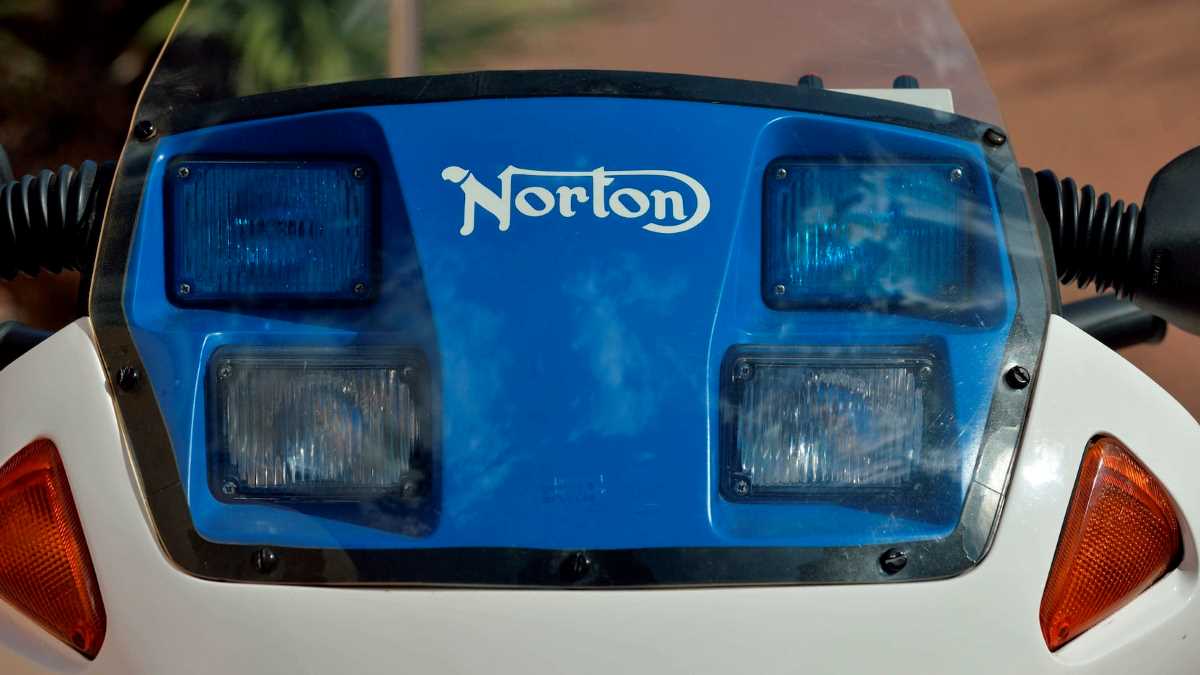 The reborn British brand launched at the end of the 80s its rarest and most daring tourist, the Norton Commander, which was the rarest police motorcycle in history…

Powered by an exotic rotary engine that was powerful, light and boozy, this Norton Commander was the second rotary bike used by British police.

With internal code P52, it was the third Norton with a rotary engine and the first liquid-cooled, since the previous ones were air-cooled.

It was the time when an attempt was made to revive the historic British brand with a new family of rotary engines, in which the super sports car and bestial Norton F1 stood out.

Going back to the Commander, it was a touring bike with a large full fairing, an upright riding position and a generously sized seat, as well as integrated fixed rear panniers -in 1992 they would launch the version with removable Krauser panniers.

Norton for this version, curiously, decided to incorporate many components in the cycle part and engine from Yamaha, specifically from the XJ900 sport tourism, in an attempt to lower costs and speed up production.

The Norton Commander was the last British sport touring motorcycle with a rotary engine.

The 5-speed gearbox was also from a Yamaha XJ900, another component added to those already mentioned, and the final transmission was by a chain, but enclosed in a plastic casing to preserve it from dirt and, thus, Try to lengthen your maintenance intervals.

The front and rear alloy wheels were three-spoke and 18” with double front disc -and single rear- of 265 mm, with double-piston calipers -from the XJ900.

These same wheels were also fitted to one of the Japanese versions of the Yamaha RD350LC, as you all remember.

The instrumentation was also that of a… yes, Yamaha XJ900, with a triple analog sphere, of the same diameter, with speedometer, tachometer and fuel level/temperature.

For its manufacture many components of the Yamaha XJ900 were used

Produced between 1988 and 1994, it was the successor to the Norton Interpol and the Classic, the first two models made by Norton in its new stage. Only 239 units were made and a short series of 14 units was also made for the police, the P52.

But here’s another little story to tell… There were also some demo units made that were never used.

One of these is the unit that you can see in the images; It was a special series built as a demo bike for the Dubai Police.

The bike was never used and an anonymous buyer took it to the United States as it is, with the specific equipment for police, the spare parts, brochures and manuals, which are pristine almost thirty years later.

With only 1,150 miles (about 1,700 km) on its odometer, it is currently about to be auctioned off by Mecum’s at the upcoming Las Vegas auction.

Benda VTR300 V-Twin Turbo Will it really be turbo?

3 quick changes in your WiFi to protect it to the...

Brady Hernandez - 03/05/2022 0
Protecting wireless networks is essential to achieve proper operation and also prevent a possible intruder from affecting other devices. To...

With this program I have managed to give my old mouse...

What is the purpose of human resources policies and procedures?

Complete detailing kit to leave your car very clean for only...

Play on the big screen! 2 cheap projectors that you...

Neem tree bark would protect against variants of the coronavirus

How to make a marketing strategy for coffee shops with a...

O2 completes its offer with this new fiber and mobile rate...

How much does it cost and how long can you park...

Filtered the Xiaomi MS11, the expected electric car of the mobile...